People peruse my blog or my Facebook page, see the gaggle of children that call me mom, and seem genuinely befuddled as to how I manage such pandemonium. When I leave the house, kids in tow, folks always want to know “Are they all yours?”, “How do you do it?” and “Where is the man who got you into this mess?”.

Okay, no one asks me that last question because that’s impertinent even for rude people.

But strangers do generally pick the absolute worst moment to offer up their obvious observations about my big family. It usually happens at the end of a shopping trip with my kids.  I’m frantically loading my groceries on the conveyor belt and I look as though I’ve been pecked, kicked, licked and honked by a herd of farm animals.

I’ve had to say “no” to seventeen-too-many boxes of congealed fruit leather and instant pizza nuggets; or I’ve had to stop my shopping altogether to race to the toilet with a child – and a flock of kids trailing behind me – to avoid the embarrassment of pee in aisle nine; or one of the little darlings – whilst twirling or hooting or swaying grandly – bumps an end-cap display and sends its contents sprawling across the floor. I get to puzzle it back together while a horde of annoyed shoppers try not to stare and my children snicker because – clearly – that’s hilarious.

While I’m crawling on the floor, chasing cans of soup rolling away from me, I will – in a most uncomfortable fashion – maniacally exclaim to nobody in particular “WHERE IS MY HUSBAND!?”, leaving the impression that some chauvinistic slob knocked me up a handful of times and left me to desperately manage the situation, alone. This, of course, isn’t the case but I would do or say almost anything to solicit a molecule of sympathy and, for goodness sake, a little help.

When the kids are grabbing eggs, poking holes in the cellophane over raw meat, dumping 12-packs of soda, and otherwise trying to “help” put groceries on the conveyor belt while ignoring my pleas to knock it off, that is when the woman behind me decides to chuckle and say, “Boy, you have your hands full!”

YOU THINK, LADY? Thanks. I know I make it look easy but I’m glad your keen powers of perception have unearthed this fact for you. I’m even more grateful that you’re the nineteen millionth person to tell me that in the last week. Next time, stow the commentary and help-a-bitch ($0.25) lift this watermelon.

“God bless you, how do you do it?” is how the elder generation often phrases it.

God must bless me indeed, as only divine intervention gives my tortured soul the humanity to let loose a polite response through gritted teeth. I usually answer with pithy platitudes, such as that I try to stay organized, or this chaos suits my personality, or that I just roll with it and take it one day at a time. And there is a nugget of truth in all of those explanations.

Other times, I’ll say “I get by on muscle relaxers and tequila shooters”. I try to gauge my audience and answer accordingly.

But there’s another truth that I usually keep to myself: having a large family is a lot of work and being constantly swarmed by children can be a little suffocating.

I am moving and going and doing and thinking and rescuing and intervening and feeding and changing and cooking and cleaning from the moment I open my eyes in the morning until I trip over a plastic shopping cart and face-plant into bed. Years of operating at this pace have left me haggard and generally incapable of second level thinking. I can’t waste any precious brain power probing for deeper meaning in anything. Most days, it’s all I can do to walk upright and convert oxygen into carbon dioxide.

So, why did we have so many kids?

We asked ourselves the difficult questions and gave ourselves sublimely simple – and ultimately naive – answers. After all, when you want something and you know the path is treacherous, you’ll just rationalize away the potential snags until you have the thing that you wanted.

What if the baby doesn’t sleep?

Then we take turns comforting our precious bundle until she calms the shit ($0.25) down or we die of exhaustion!

Ok, that’s great, in theory. Until you actually die of exhaustion. I’ve done that several times and it sucks.

What if they all get sick at the same time?

Then we line up some buckets for poo and puke and hold an in-service on which bucket is for which problem! Just to make sure we don’t have any crossing-of-the-streams, I’ll write a reminder on the chalkboard menu in the kitchen! No one will be eating for a while, anyway!

This assumes you can estimate ahead of time the river of poo and puke violently ejected from a child when they’ve got a nasty stomach bug. What toddler (1) has the planning skills and (2) the physical capability to move when hurling with shit ($0.25) running down their leg? Mackenzie, you idiot!

What if we want to take them to Disney and it costs a small fortune because there’s so damn many of us?

Then we just won’t go. Plenty of kids have never gone to Disney World and they survived.

This rationale is factually accurate but ignores the practical reality. When you see the beaming smiles of your friends’ kids in Facebook photos of their family trip to Disney, you must go and you must go now while they are young and innocent and impressionable! They will only be this age ONCE, and if they don’t go NOW, they won’t like it as much. Seriously, Facebook photos are Disney’s best marketing strategy yet.

What if we have to take out a second mortgage on our house just to keep them all in shoes that fit?

There’s hand-me-downs and second-hand stores and they’ll all have shoes that fit, silly.

This might apply to ordinary children, but our kids were born to parents with Fred Flintstone-feet, and they require extra-wide shoes that are never in stock and cost fifty bucks a pop, when I can find them. They also need to be replaced every four months because our kids are mammoths and grow like weeds. So on this point we’re kinda screwed. Maybe not second-mortgage screwed (see: Disney), but certainly Yes-It’s-Ramen-For-Dinner-Again screwed.

What if, while I’m trying to drive and make an appointment with the pediatrician for a suspicious rash on the baby, one girl complains because her sister’s car seat is so close to her that their arm-skin is touching and the boy is whining for more food even though he is presently enjoying the toasted waffle I gave him when we left the house and the teenager is texting me to bring home food because there’s “no good food here”? What then?

We’ll just deal with it! Take it day by day!

In other words, we had no idea how to deal with that, and I still don’t. I suspect the answer involves booze, carbs, sleep and chocolate.

Truthfully, some of this hassle is self-imposed. I don’t have to take these kids swimming, or to paint pottery, or to the art museum. I could go grocery shopping alone after they’ve gone to bed. But most of the time these things are actually fun, at least in the beginning, and I get a thrill out of giving them new experiences. I love the look on their faces when they try something amazing in this world for the first time, especially when that amazing something is Candy Corn Oreos.

Unfortunately, their curiosity usually overcomes their judgment and, at some point in every excursion, the novelty wears thin, the day grows long, they get tired, I get tired, we all meltdown together, and a few days later you people get a profanity-laden rant about it. 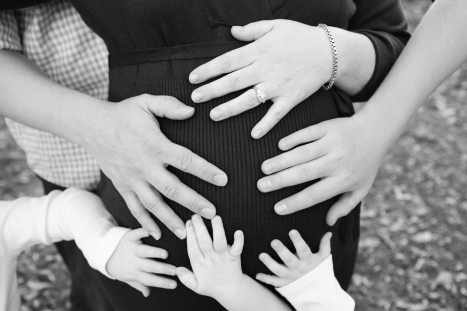 So, yes, I have my hands full. If I had ten hands, I’d still have my hands full. And while in the moment I’m spitting nails and fully prepared to drop-kick one of these kids down the cereal aisle, the truth is that I am addicted to my children and I wouldn’t have it any other way.

7 thoughts on “The truth about my big family …”