When you stop to think about it, the process of getting a baby out of your body is amazing. There’s the old-fashioned “natural” method which, in terms of physics, is about like Andre the Giant pulling on a turtleneck sweater. That fucking ($0.25) thing will never be the same again.  I missed out on that little miracle of geometry, as all five of my children were surgically removed by C-section.  In either case, read on, because I’m about to make you feel better either about your to’ up from the flo’ up vagine (vah-jeen), or your undeniable need to fart. Maybe both.

C-section farts are a very real and totally not made up phenomenon, people.  The theory is that when you’ve had a C-section, your innards are irreversibly rearranged in a manner that leaves extra pockets for gas to get trapped.  Unlike your garden variety poop-gopher, this is not methane from food digestion, it’s just ordinary air.  Thus, when it finally escapes, you get all the pleasure and comedy of a massive fart, but none of the stink.  People.  That’s magical.

Now, I’m not a scientist, but I have had five C-sections and I’ve experienced this theory firsthand.  I’ve been hypothesizing this for years.  If you’ve had only one c-section, you may not even notice because I mean – hey – it’s not like you lay down a mud duck and then hang around to see if it’s malodorous.  You get the hell outta there!  But, with five kids, there is no escape.  It happens where it happens, consequences be damned.  How refreshing to know that not every butt dumpling is going to reek of rotting ass ($0.25).

So this morning, I rolled out of bed and went to greet my baby Charlie.  As I was sitting on the floor changing his diaper, I began to feel a very heavy, full sensation in my nether region, which grew into a tidal-wave of unbearable pain within a few minutes.  I was paralyzed in the fetal position clutching my belly.  I couldn’t tell if I was about to unleash the most amazing fart of my life or shit ($0.25) a live elephant.  I began to drip sweat, and I tried to call for my husband but my voice caught in my throat.  Talking requires that you take in even more air, and that shit ($0.25) wasn’t happening.

Eventually my husband, who had been making our coffee, came back upstairs and found me in my debilitated state with a naked baby running around and, in typical husband fashion, said, “What should I do?”  I had him help me onto my side and then on to all fours. That position did the trick, arranging my intestinal landscape into the correct configuration for smooth travel, and I proceeded to split the seam of my pajama pants with a thunderous expulsion of air that I can only describe as foghorn-esque.

These dudes ain’t got nothing on me.

I clutched the carpet with my fingers and let my people go until all of Egypt was free. True to my theory, there was no lingering miasma circulating throughout the room.  The air was clean and my family, while alarmed, was uninjured.

My husband thinks I’m full of it (which I’m clearly not, especially now), and says even if my theory holds water, the c-section farts should have subsided by now since my last c-section was almost eighteen months ago.  But I say I carried the babies, I endured the innard-rearranging, the bloating, the excruciating pain, the inexplicable crap tulips, and I have personally observed and journaled all of the fugitive emissions.  Until you’ve birthed a child in any way, do not speak to me about my own flatulence.  Your job is merely to sympathize, endure, and buy me Gas-X.

And new underwear when I underestimate the status of the flatus.

Spencer started it all by being breech. And then he had to go to a Children’s hospital for surgery and so this picture was taken the day after he was born, at his hospital. My doctor temporarily discharged me to see him before his surgery. So that sucked. 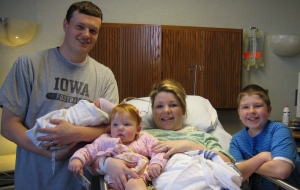 And then – WHAT THE FUCK ($0.25) – Maggie was a paltry 7lbs. 8oz. I totally could have pooped her out but after you’ve had two sections, you’re always a c-sectioner.

Hayden decided to come three days before my scheduled c-section so we don’t have any pictures of the six of us and that makes me kind of sad.  But then there’s me trying to kiss him while he screams bloody murder so … there’s that.

Awesome sauce. My handsome husband. My awesome doctor who delivered all five of my babies. I don’t look too shitty considering my guts were just is that dude’s hands thirty minutes before this picture was taken. My girls’ hair is combed and Spencer, the teenager, is smiling. Holy shit. I’ve found it … the most perfect picture ever.

Disclaimer: this was originally written by me and posted on an old blog that no one ever read.  I have updated it for you to enjoy now.